He looks to us for an explanation, for assurance.
Even now the world must be quite a lot for him. He is cognizant, aware of very tiny changes, very tiny events. He still stares at a single beam of light that comes from somewhere, hovering on the wall. He still stops at the sound of a helicopter, a loud truck, the train whistle in the distance. A single dry leaf skitters over the dusty rocks on the beach and he is transfixed, the whole world suspended except for the leaf, moving endlessly.
Being in his present makes time expand just slightly. It burgeons the seconds. 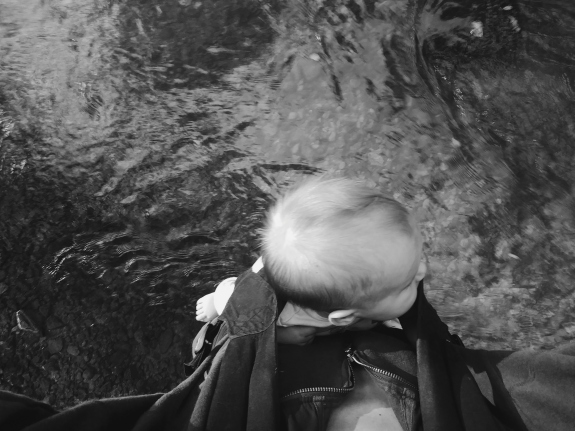 Pregnancy was a faint line on the cheap test.

We upgraded to the expensive test, sold to me by Jayde who said, “I hope the results are favorable” which seemed a tactful way to acknowledge the weight of sending a stranger home with a pregnancy test.

Then it was quick, conspicuous. PREGNANT said the digital test. From that moment on, pregnancy was a long, clean line from start to finish. I was pregnant. I didn’t know exactly what that meant, but it was true.

I don’t mean to make pregnancy sound tidy, but there is comfort in the slow and steady progression, the growing, the symptoms. There is a consistency, a regulation to the size of the foods our baby became – sesame seed, blueberry, avocado, eggplant, pumpkin.

Motherhood is the opposite. There is no more arrival. We arrived, briefly. We all held each other and wept for joy and exhaustion and relief. The arrival was a breath.

Now is the sundering. Now he splays like a starfish in his sleep, and I can remember when he still curled up on my stomach, trying to fit back in the space from which he came.

And I will never arrive at his departure. When he is gone I’ll still miss him, still think of him. Pieces of him will be leftover, the way that Jeff has boxes of his things still at his folks and comes to visit and knows where to look for food, for empty boxes, for tools to borrow.

The progression is bumpy, inconsistent. He sleeps, he doesn’t, he does. He does not eat. He eats a little. He eats a lot. He throws his food on the floor and waves his arm “all done.” I eat the leftovers.
He crawls, scoots, crawls again, steps, scoots, runs. “Mama,” he says, and then not again for months despite my earnest coaxing, calling my own name.